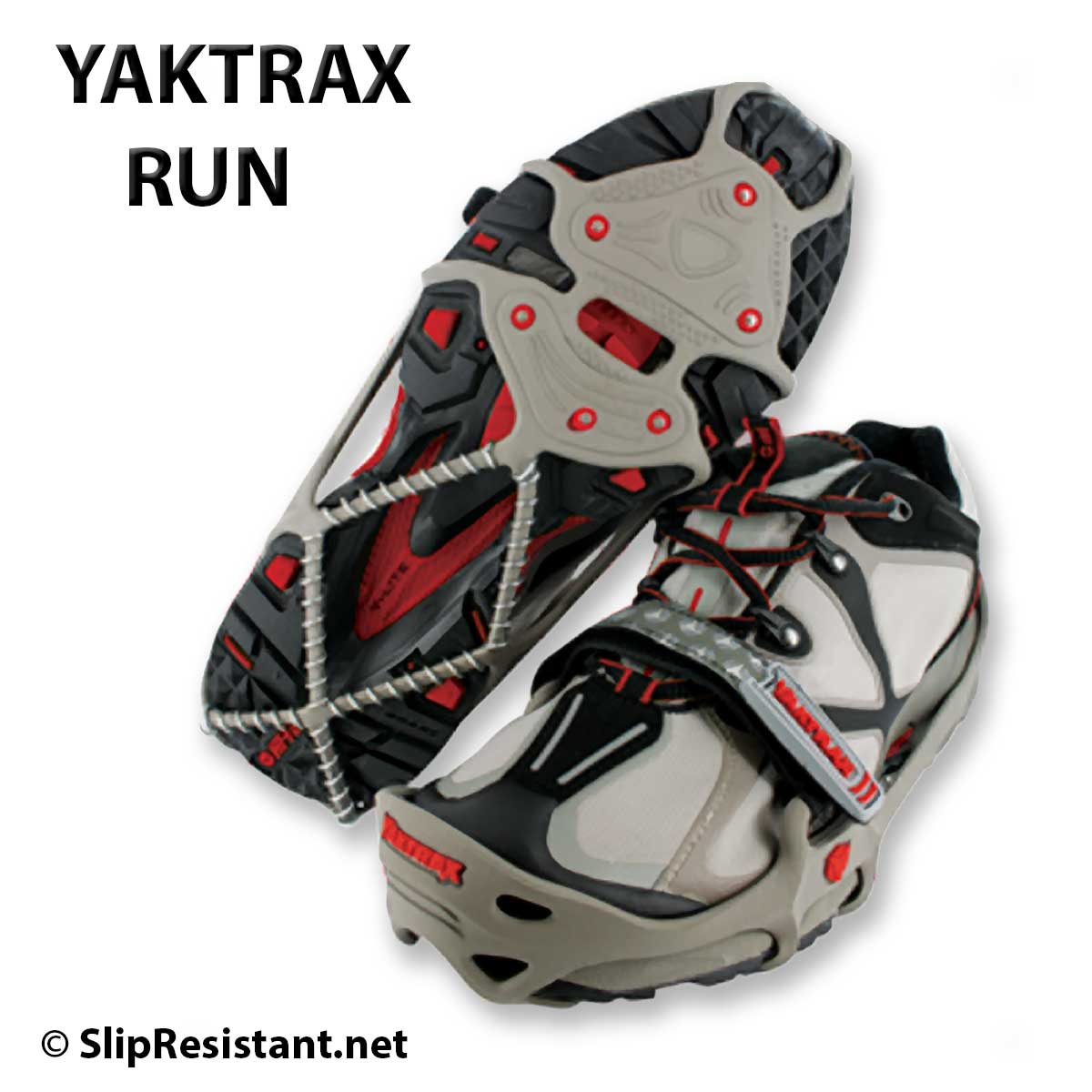 Yaktrax Walk, previously called the Yaktrax Walker, was introduced over a decade ago and remains the most popular Yaktrax model. Yaktrax were truly revolutionary because they eliminated spikes found on traditional ice cleats.

Yaktrax Walk gives you instant traction on ice and packed snow because abrasion and rust-resistant 1.2mm stainless steel coils have shaped edges. The edges give you hundreds of biting edges that grip the ice in all directions with every step.

Yaktrax Walk has elastomer straps that are

People used both the Yaktrax Walk and the Yaktrax Pro for winter running. And, a few years ago, Yaktrax came out with the Yaktrax Run specifically designed for running shoes that keep you safer while running on ice and packed snow. 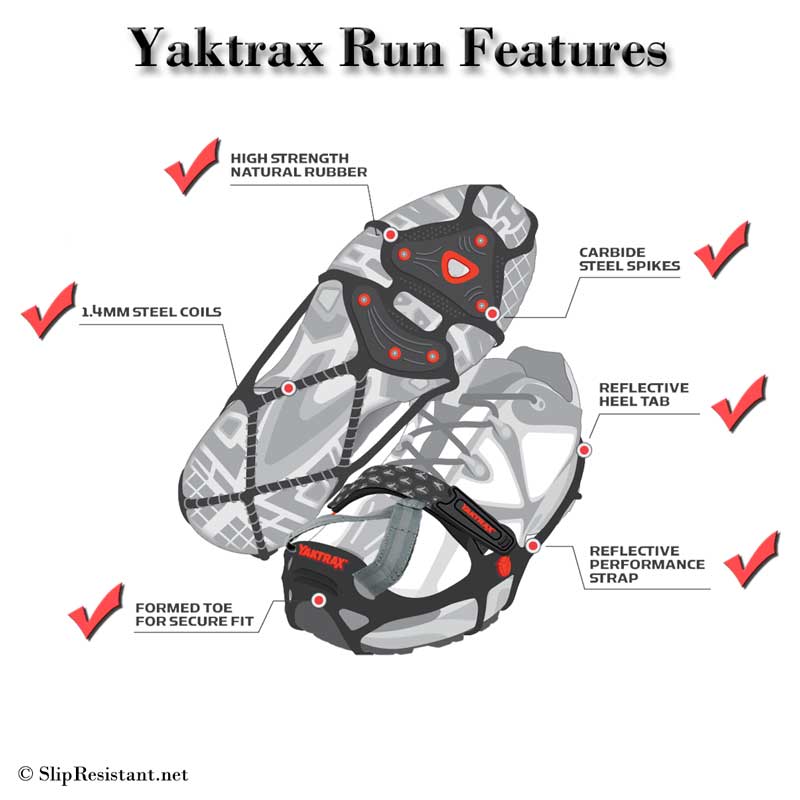 Now, having said all that, on the average you can expect one to two seasons. When you consider the cost per use it's very low-cost insurance compared to the cost of an injury.

Will Yaktrax eliminate my risk of slipping on ice and packed snow?
No. No traction device can guarantee you won't slip and fall on ice. What Yaktrax can do is significantly decrease the probability that you won't fall to make the risk acceptable.
Do Yaktrax work in deep snow or slush?
No. SPARE SPIKE Ice Cleats are a low cost alternative for Yaktrax that will work in regular snow and slush. Visit my Ice Cleats Buyer's Guide to find more Ice Cleats effective on all winter slick surfaces.
Must I remove my Yaktrax every time I go indoors?
You absolutely must remove Yaktrax before going indoors where there are smooth, dry floors like those found in the

Are Yaktrax good for hiking?
It depends where you're hiking. Yaktrax are not designed to be used off-road.
Do Yaktrax work on black ice?
I do not recommend Yaktrax for use on black ice because you need more aggressive traction. Consider Winter Walking HIGH-PRO or Winter Walking LOW-PRO Ice Cleats.
I've read that Yaktrax have 10 times more biting edges than spiked ice cleats. Does this mean the traction is 10 times better than spiked ice cleats?
No. The key to traction on ice is penetration. Yaktrax stainless steel coils are non-aggressive. Therefore, getting traction on ice requires hundreds of biting edges to equal the traction of just one well-designed spike. In addition, the non-aggressive coils become less effective in frigid temperatures when ice is denser.
Will Yaktrax work on Ski Boots?
No. Implus does offer a product called SKITRAX. However, I don't carry them
Will Yaktrax work on Neos® Boots or Bunny Boots?
No.
Will Yaktrax work on roofs?
No. Furthermore, the metal on metal contact when climbing a ladder is extremely dangerous. Visit Korkers.com to find tractions devices specifically for roofs.
What are WinterTrax?
WinterTrax are manufactured by Implus. They're an ultra-light duty, one-size-fits-all, extremely inexpensive, and almost one-time use version of Yaktrax. One national marketer sells them as being actual Yaktrax and makes it appear that you're getting a great deal by getting two pair of Yaktrax for the price of one pair from another source. Again, WinterTrax are not Yaktrax. I don't sell WINTERTRAX because they don't hold up and they don't stay on your shoes.
Why are they called Yaktrax?
They're named after the surefooted Tibetan Yak. But the concept really has nothing to do with the Yak. The idea originated by observing how Sherpas would tie strips of leather around their shoes to get traction on ice.

Yaktrax will not damage most indoor floors. However, you must remove Yaktrax before walking on smooth, dry floors because Yaktrax are extremely slippery on these surfaces.

If you are unable or unwilling to remove your Yaktrax before going indoors or driving, or you live or work in a city, consider Winter Walking LOW-PRO Ice Cleats. LOW-PRO are safe to wear on most indoor surfaces and while driving. LOW-PRO also provides better traction on the city hazards mentioned above.

What Are Yaktrax? Crucial Sizing Tips Help You Get the Right Size on the First Try! Are Yaktrax the Best Choice for Businesses? Will Yaktrax Work on Kids Shoes? Discover Yaktrax Safety Warnings and Warranty Details Compare Yaktrax to Studded Ice Cleats Amazing Testimonials from People Who Love Yaktrax!
Yaktrax Walk sizes run small. If your shoe size is at the top of a size range shown below, you may be better off getting the next larger size, especially if you plan to wear them over heavy boots or shoes. If you can't decide, choose the bigger size.

Contact Me at 1-610-670-2549 or by e-Mail for Quotes on Large Corporate Orders
Yaktrax Pro sizes run small. If your shoe size is at the top of a size range shown below, you may be better off getting the next larger size, especially if you plan to wear them over heavy boots or shoes. If you can't decide, choose the bigger size.

Here's why buying ice cleats from us gives you peace of mind.

The last thing I want is for you to be disappointed in your purchase or feel that I mislead you or treated you unfairly. So, in the unlikely event you're not totally satisfied with your ice cleats or shoe traction devices purchased from me, I'll refund your money and pay for the return freight. Call me at 610-670-2549.